All About Quartz Devices

All About Quartz Devices

What are quartz crystal devices?

Quartz crystal devices are used in many everyday electronic goods, such as smartphones and other information and communication systems, high-resolution audio products and other audio-visual equipment, and automobiles. The smartphone enables you to communicate with people throughout the world and obtain desired information whenever you want and wherever you are. Useful smartphones use radio waves to send and receive voice and text. The quartz crystal device is the component that accurately and stably generates a reference signal for radio waves.

The Magic of Quartz Crystals

What first comes to mind when you hear the words “quartz crystal”? Is it a crystal ball, necklace, ring or other accessory? Since ancient times, quartz crystals have been called the “spirit of water” and highly valued. They are not only beautiful, but also have various physical properties.

Another property of quartz crystals is that it splits a ray of light incident on it into two linearly polarized rays that differ from each other in the direction of oscillation, i.e. into ordinary and extraordinary rays. By utilizing this property, optical low-pass filters remove false optical signals known as moire patterns and improve image quality, because moire patterns degrade the quality of images taken with a consumer digital camera or security camera.

Amethyst
This type of quartz absorbs yellow to green rays of light due to iron ions contained in it and therefore looks purple.

Citrine
Like amethyst, citrine contains iron ions. However this quartz absorbs blue to purple rays of light and so looks yellow because the arrangement of electrons of iron contained in citrine differs from those of amethyst.

Quartz crystal devices used to use natural quartz, which, however, had problems such as high levels of impurities and unevenness in size and quality. Synthetic quartz was developed as a solution to these problems. The following is an introduction to how synthetic quartz is produced.

Seed quartz crystals (quartz plates with few defects in their crystal arrangements) are placed in the upper half of a huge pressure vessel, known as an autoclave, filled with an alkali solution. In the lower half of the vessel, natural quartz used as a row material, known as lasca, is placed. Synthetic quartz crystals are formed through recrystallization under high temperature and high pressure conditions. The crystal growth process takes two to three months depending on the variety of quartz. Some synthetic quartz crystals take as long as about six months to grow. 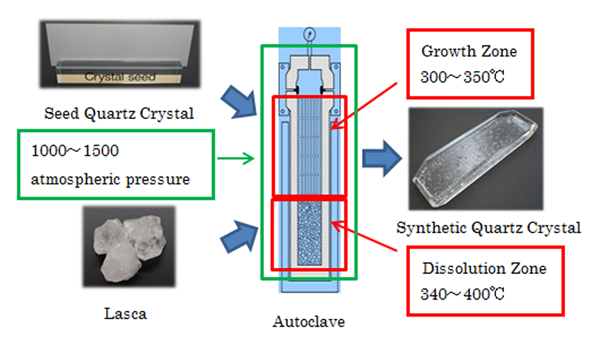 How is quartz incorporated in an electronic component? Let's have a look at the production process, taking an example of a crystal resonator.

①Processing a wafer of quartz

A quartz crystal is a clear, colorless crystal. However, its orientation should be noted. To make it functional as an electronic component, it is necessary to identify its crystallographic axis. In this process, the crystal is “lumbered.”

Using metal films such as gold and silver, electrodes are formed on the processed crystal wafer. When a voltage is applied across these electrodes, the crystal wafer oscillates, which is known as inverse piezoelectricity.

The crystal wafer with electrodes is secured in a ceramic or other package using a conductive adhesive. After being firmly bonded to the package to resist various shocks such as dropping and vibration, frequency adjustment is completed by monitoring the frequency in the order of ppm (parts per million). Subsequently, the package is hermetically sealed in a vacuum or nitrogen atmosphere to prevent oxidation of the electrodes.

The crystal resonator is subjected to a stringent final inspection to check its conformance to standards for the intended characteristics. Crystal resonators that have passed the inspection are packaged and shipped.

Electronics has contributed to building for many people a convenient and affluent society. The introduction of quartz into clocks and watches in the 1970s and the emergence of the radio clock in the 2000s enabled us to know more accurate time than before. Since then, flat-screen TV sets appeared on the market and in 2003 digital terrestrial broadcasting began in Japan enabling audiences to enjoy TV programs on a large thin screen. Digital cameras have freed photographers from concerns about films and enabled them to enjoy their photos in a variety of ways. Furthermore, in the automotive industry, the use of electronics advanced in power train, vehicle control and body control applications. These developments, in conjunction with information and communication technologies, including automotive navigation, are leading to a remarkable evolution into autonomous car technology. Quartz devices have contributed to these examples of evolving electronics, playing an important role in the aforementioned equipment. Since the development of high-reliability information and communication technology (ICT) infrastructures, ICT is spreading into the areas of medical care, nursing care and agriculture. Quartz devices, a key element in electronic products as described above, are increasingly gaining importance.