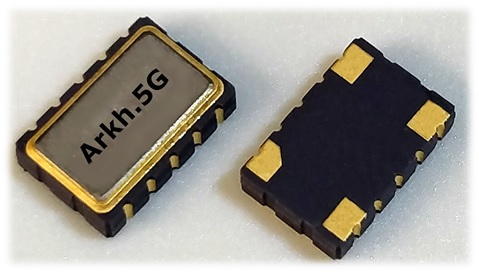 Daishinku Corp. (President: Sohei Hasegawa) has developed an oven-controlled crystal oscillator (OCXO) that contains our proprietary next-generation crystal timing device, Arkh.3G.
Network services using fifth generation mobile communication systems launched in 2020. The systems feature high speed and large capacity, low latency, and connection with multiple terminals, which enables the provision of various new services and brings innovation to the industry.
Since 5G network services use higher frequency bands than the conventional services, they are expected to demand the installation of a significant number of base stations to provide sufficient coverage due to the higher degrees of line-of-sight propagation and the effects of reflection of the radio waves. And, as the number of local 5G base stations increases, equipment with smaller size, lower cost and power consumption is demanded. These trends call for new timing devices based on smaller and lower-power-consumption OCXOs with higher stability, compared to the conventional temperature compensated crystal oscillators (TCXOs).
In general, OCXOs achieve a high level of stability by maintaining the temperature of its crystal oscillator constant to minimize the effects of the temperature characteristics. Conventional OCXOs have a large core, which is an oscillator circuit containing a crystal oscillator, with the corresponding amount of heat capacity and heat dissipation, consuming a significant amount of power consumption.
To resolve this drawback, we have introduced a proprietary OCXO structure, with the core built on an ultra-small Arkh.3G (oscillator), which has led us to the success of developing a compact (7.3×4.9×2.0 mm) and high-performance OCXO. Arkh.3G is smaller by more than 85% in volume and 50% in profile compared to the conventional product (world’s smallest 1612 size crystal oscillator). Using Arkh.3G in the core has enabled miniaturization, which minimizes the heat capacity and heat dissipation. In addition, the core of the conventional product is generally under atmospheric pressure. But the new core structure is maintained in a vacuum, which eliminates the effects of thermal convection.
The development of the small core translates into further downsizing, to 5.0×3.2 mm for example. Moreover, a multi-layered package will improve thermal insulation with the dimensions maintained the same or slightly larger, which achieves precision enhancement while preventing an increase in size. We are also planning to expand our product lineup.
Conventional OCXOs are assembled manually due to their complicated structures and large numbers of components, which raises production costs, making them unsuitable for mass production. On the other hand, our new OCXO is sealed in a ceramic package, which has been widely used because of its simple structure. This design facilitates assembling on a fully automatic production line, which will enable us to supply a large number of OCXOs at low prices to the base station market, which is expected to grow rapidly.

We announced the commercialization of Arkh.3G, a crystal device with an entirely new structure in June 2017. Arkh.3G eliminated the use of a ceramic package and electrically conductive adhesive. Our proprietary fine-sealing technology achieved wafer-level packaging, in which three layers of wafers are bonded together on a crystal base. This product realized in small size, low profile with high reliability.
Our new product has enhanced performance by introducing Arkh.3G with an ultra-small crystal oscillator that is composed of only inorganic materials, which do not exhibit outgassing.